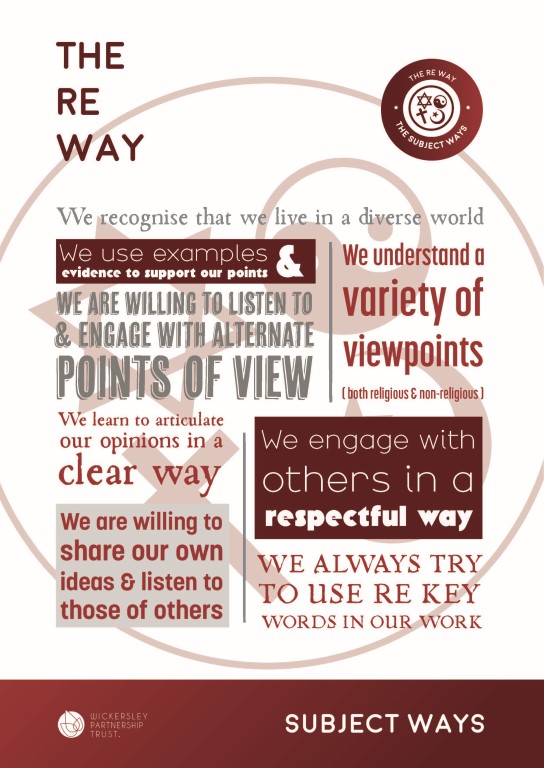 Overview of KS3 RE

At Wickersley Partnership Trust (Secondary) our RE curriculum is designed to allow students to understand a range of worldviews (both religious and non-religious) and develop the ability to articulate and justify their own ideas both verbally and in writing.  Across KS3 RE students develop both Knowledge and Understanding and Personal Opinion and Debate skills. Students have the opportunity to develop an understanding of the main beliefs and practices of Christianity, Islam, Sikhism and Buddhism. They also have an opportunity to study religions by focusing on themes, such as the media and life after death.

Within this topic students will also gain an understanding of how Sikhism began as a religion, key Sikh beliefs and how these influence the daily lives of Sikhs,  for example the 5 Ks for Khalsa Sikhs.  Students will understand and consider the role of sewa (selfless service) within Sikhism.  Students will develop their personal opinion and debate skills by considering a range of debate questions linked to the topic of study.

Drop down day – Year 7 students will learn about the places of worship for two of the major world religions.

Spring Term- Religion In The Media

Within this topic students will understand what the media is, different examples of the media and consider potential issues with using different media outlets as a source of information.  Students will then consider different religious themes/beliefs/events that have been portrayed within the media; throughout this topic students will be developing their personal opinion and debate skills by considering if in their opinion there should be freedom of the press or if some religious ideas should be censored within the media.

Within this topic students will understand a range of different beliefs about life after death and the evidence provided to support these beliefs.  Students will consider both religious and non-religious ideas that both support and reject belief in an afterlife.  Students will develop their personal opinion and debate skills whilst consider paranormal acitvitiy, Christian, Muslim and Humanist beliefs as part of this topic.

Drop down day – Year 8 students will learn about the places of worship for two of the major world religions.

Across Year 9 students will engage with a variety of religious, philosophical and ethical ideas.  For instance, students will consider what is good/bad, what should be a source of authority to guide human behaviour, the ethics of using animals in sport, divergent religious beliefs about same-sex marriage, the purpose of punishemnt, if capital punishment is ever acceptable, the origins of human beings (scientific and religious ideas).  Across the course of the year students will be developing their

Drop down day – Interfaith ideas on the ethical issue of climate change.